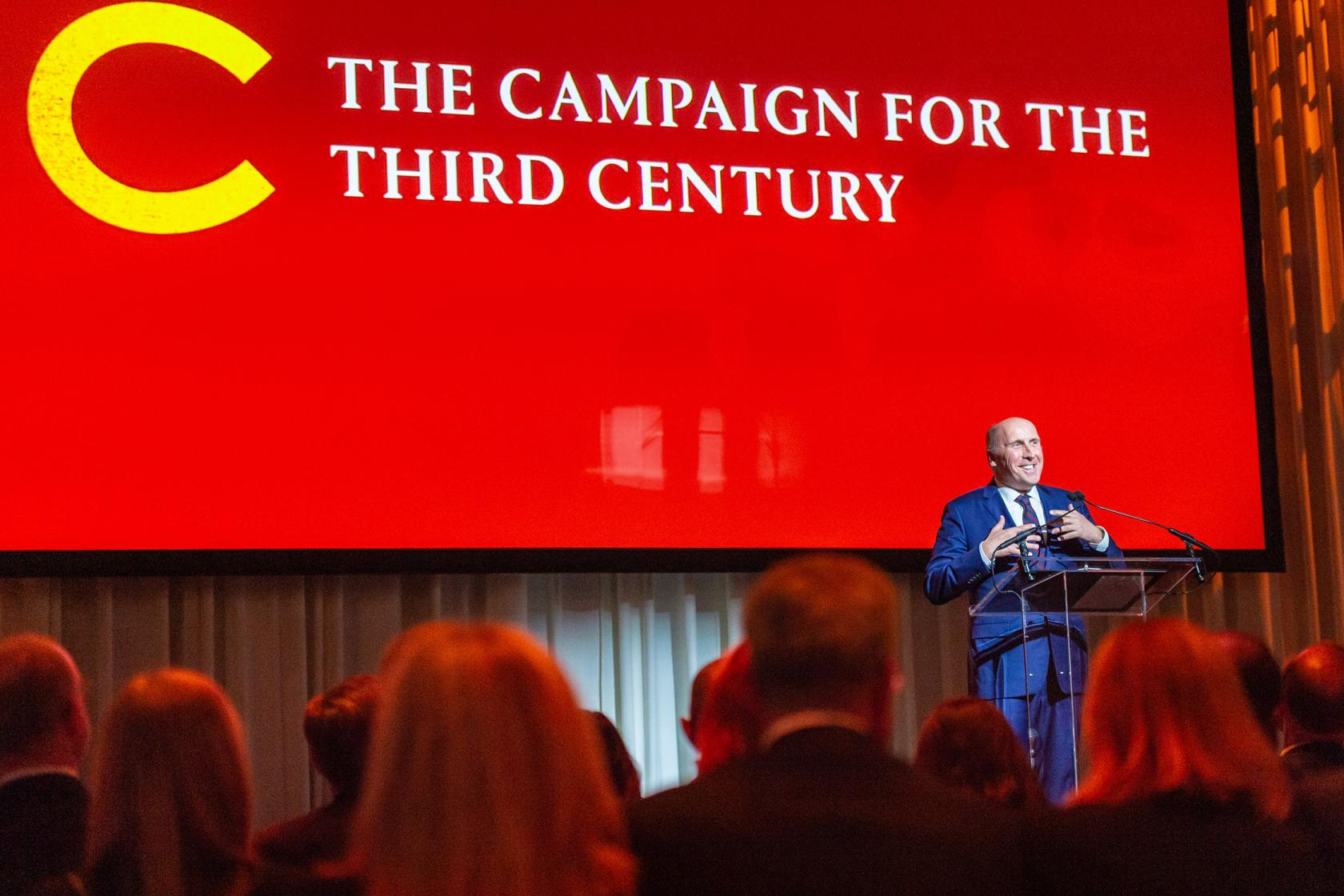 Colgate University publicly launched the largest philanthropic campaign in its 203-year history on Friday, April 22 – and the largest such campaign undertaken by a liberal arts college.

“We seek to not only be one of the most compelling undergraduate institutions in the country, but a leader,” said President Brian W. Casey. “The college that reaffirms the liberal arts, that embraces debate and inquiry, and that cherishes having students from all different quarters and all different means living together in an intentional community. The Third-Century Plan and this campaign are the most ambitious undertakings in our history, and they set the path to move Colgate to new heights.”

With a $1 billion goal, the Campaign for the Third Century will provide resources for Colgate’s Third-Century Plan, the long-term, strategic roadmap for the University that was introduced and adopted by the institution during its Bicentennial in 2019.

More than $410 million has already been committed to support campaign priorities and will accelerate Colgate’s ability to attract talented students and faculty; strengthen its academic enterprise; enrich the student experience; and enhance its idyllic campus, famous for its beauty.

“Colgate is a creative and energetic institution with a mission of the utmost importance for the world,” said Michael Herling ’79, P’08,’09,’12, chair of the University’s Board of Trustees. “The Third-Century Plan takes the strengths of our institution and scales them up to meet modern demands, and the campaign will provide the resources to help us realize the Plan’s full potential.”

The Campaign for the Third Century is the University’s first comprehensive fundraising campaign in nearly a decade and promises to usher in the largest and most significant transformation in the history of Colgate.

Touching on every aspect of University, the campaign will focus on building new strengths in several key areas: academics; creativity and innovation; faculty; admissions; residential life; athletics; campus and sustainability; diversity, equity, and inclusion; and life after Colgate.

“All of our Colgate stories intersect in this campaign and through the Plan,” said campaign co-chair Gretchen Burke ’81. “I encourage all members of our community to take part in a tradition of philanthropy at Colgate that has made our own experiences possible and memorable.”

In the leadup to the launch of the campaign, 13 women graduates of Colgate stepped forward with $1 million each to support campaign priorities. The first-of-its-kind collaboration aims to generate a wellspring of support for the University’s third-century ambitions, while inspiring philanthropic giving at all levels.

Generosity through Colgate’s Thirteen Women Initiative and other efforts will provide the necessary resources that allow the University to implement the structures — both physical and intellectual — that help the institution solve today’s complex problems and meet the challenges of tomorrow. Highlights include:

Addressing a crowd of more than 400 alumni, faculty, and University leaders at Friday’s event in New York City, University trustee and campaign co-chair Christine Chao ’86 recalled her first-ever gift to the University.

It was January of 1987, less than a year after graduating, and it was for $25 in support of the Colgate Fund. Now, Chao is one of 13 Colgate women who recently committed $1 million as part of the Thirteen Women initiative.

“Whether your passion is financial aid, the arts, athletics, innovation, research, buildings, infrastructure, trees, or computers, this campaign has something for everyone,” said Chao. “Each of us has the opportunity to play a role in Colgate’s Third-Century Plan by making a gift that is meaningful to us, in that moment.”

Chao’s comments served as a through line for the celebration, which included remarks from Burke, Herling, and Casey.

Earlier in the evening, Pulitzer Prize-winning poet and Donald M. and Constance H. Rebar Professor in Humanities Peter Balakian helped set the tone for the event and place the campaign in context by reflecting on Colgate’s third century.