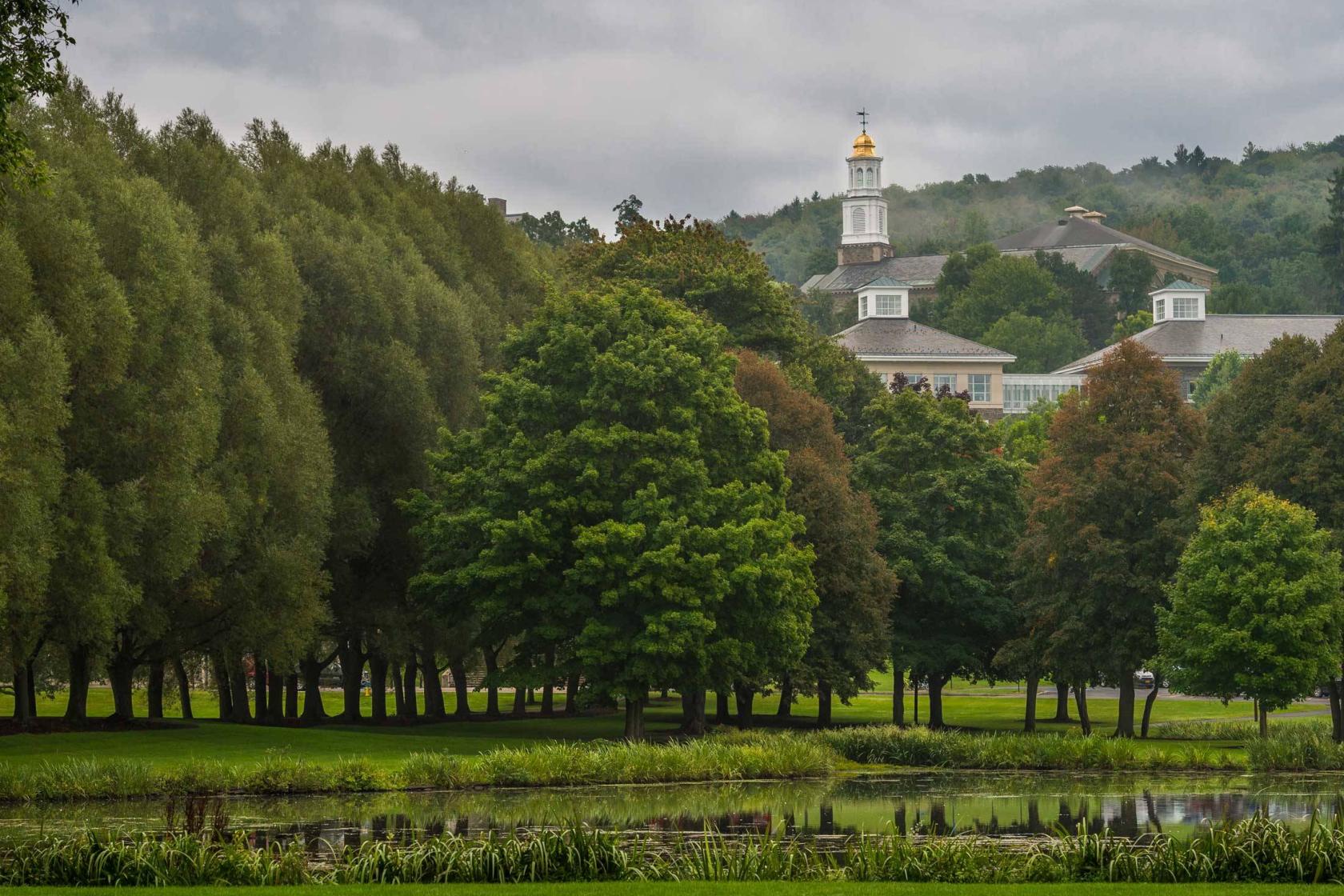 Endowed professorships recognize Colgate’s top faculty for academic achievement, distinguished teaching, and the promise of future accomplishments. During its spring meeting, the Colgate University Board of Trustees approved a series of appointments to endowed chairs, effective July 1, 2021.

“We greatly appreciate the generosity of those who provide gifts to support excellent work, and I celebrate these highly valued colleagues for their achievement of these significant professional accomplishments,” says Provost and Dean of the Faculty Tracey E. Hucks ’87, MA’90.

The creation of two new Third-Century Endowed Chairs was approved by the Board of Trustees on May 2, 2021. The holders of these new chairs were recommended by President Brian W. Casey and Provost Hucks, in consultation with the Dean’s Advisory Council.

Established in 2020 by Peter L. Kellner ’65 and family (Erik M. Zissu ’87, Zoe H. Zissu ’16, and Claudia M. Hensley ’19), this is a permanent endowment fund created to assist Colgate University’s efforts in recognizing teaching excellence and scholarly achievements in the field of arts, creativity, and innovation and to support the University’s efforts to promote the Middle Campus.

DeWitt Godfrey has been a member of the Colgate faculty since 2003, teaching classes in studio art and in the Challenges of Modernity core component. He was a member of the inaugural group of CORE fellows at the Museum of Fine Arts, Houston, and has served as the president of the College Art Association. As a large-scale sculptor, he employs carefully conceived structural processes in his work, combining cutting-edge digital technologies with custom craftsmanship, all grounded in empirical knowledge and experimentation. Godfrey’s work can be found in private and public collections including the Museum of Fine Arts, Houston; the Brooklyn Museum; and the DeCordova Museum and Sculpture Park. He is currently working on projects at the Portland International Airport (Portland, Ore.), Alameda Point (Alameda, Calif.), and 39th Avenue Greenway (Denver, Colo.). Most recently, Godfrey was invited to the European Cultural Center in Venice, Italy, for an exhibition titled “Time, Space, Existence.”

The Third-Century Chair in Philosophy, Politics, and Economics

Timothy Byrnes joined the Colgate faculty in 1992 after serving on the faculty of the City College and Graduate Center of the City University of New York. His research interests include transnational politics as well as religion and politics. His scholarly books include Reverse Mission: Transnational Religious Communities and the Making of U.S. Foreign Policy, Transnational Catholicism in Post-Communist Europe, and Catholic Bishops in American Politics. He has been a weekly panelist on WCNY-TV’s Ivory Tower for many years. On campus, he has served as chair of the Department of Political Science and director of the Benton Scholars Program, was a Colgate presidential scholar, and is a past winner of the Colgate Alumni Corporation’s Distinguished Teaching Award.

Established by the Charles A. Dana Foundation in 1966. The foundation invited Colgate to participate in the Charles A. Dana Professorship Program. The fund provides research support for distinguished members of the Colgate faculty. Said professors are faculty members whose responsibilities are in teaching rather than administration. They may be faculty members who are new appointees, in a subject matter determined by the University.

Spencer Kelly joined the Colgate faculty in the Department of Psychological and Brain Sciences in 2001, bringing his expertise in psycholinguistics research. Since arriving at Colgate, he has helped to shape the department curriculum with courses in cognitive neuroscience, developmental psychology, and research methods, including an online Great Course, Language and the Mind. Kelly received his BA in history from Washington University, St. Louis, and his MA and PhD in developmental psychology from the University of Chicago. He completed post-doctoral research at the University of Louisville prior to starting at Colgate. The main focus of his research examines the interacting roles of body movements and language in communication and cognition. Using social and psychological behavioral methods, Kelly investigates how gestures influence the ways in which children and adults comprehend language in different social contexts and how they think during the explanation of difficult concepts. On the neural level, he uses event-related potentials (ERPs) to study how gestures influence speech at multiple stages of language comprehension. Kelly is the co-director of the Center for Language and Brain at Colgate; has numerous articles in psychology, neuroscience, and linguistics journals with a focus on co-speech hand gestures, neural integration of multimodal communication, and language processing and development; and he has recently co-authored a book, titled Why Gesture? How the Hands Function in Speaking, Thinking and Communicating. Kelly was a co-principal investigator on a National Science Foundation Research grant and on an NSF Major Research Instrumentation grant that awarded Colgate a state-of-the-art electroencephalography (EEG) system that records the temporal location of electrical signals generated by the brain in real time for studies of the human mind and behavior.

Robert Nemes joined the tenure stream faculty in 2000 after serving one year as a visiting assistant professor in the history department. He is a Columbia University–educated historian with a research specialty in Central and Eastern Europe. His current projects focus on Central Europe’s big cities and small towns; the Danube River’s past and present; and the hidden history of everyday commodities such has tobacco, coffee, and wine. He has published two books, Another Hungary: The Nineteenth-Century Provinces in Eight Lives and The Once and Future Budapest, as well as a number of articles. He is the co-editor of the book Sites of European Antisemitism in the Age of Mass Politics. On campus, he has pioneered popular courses titled Coffee and Cigarettes: A Global History and European History Through Tourists’ Eyes, as well as teaching a variety of other European history courses. He is the current chairperson of the Department of History. He has taught and led a group of sophomore residential scholars on a trip to Costa Rica and served as the faculty director of the Alumni Memorial Scholars program.

Rebecca Shiner joined the Department of Psychological and Brain Sciences in 1999. As a new member of the Colgate faculty, she brought her research expertise in personality, clinical psychology, and child development. She further expanded the psychology curriculum with her courses on developmental psychopathology, personality psychology, and psychotherapy. Shiner received her BA from Haverford College and her PhD from the University of Minnesota, and she completed a clinical psychology internship at the University of Rochester Medical Center. As a trained clinical psychologist, Shiner has garnered experience working with children, adolescents, adults, and families. Her research examines personality development across the lifespan and addresses the structure of personality in childhood; continuity and change in personality; and the impact of personality on various life outcomes, including academic achievement, relationships, and the emergence of psychopathology, especially personality disorders. She also has interests in the processes underlying depression and anxiety. Her research has resulted in numerous publications in prestigious developmental psychology and personality journals as well as two edited books, The Handbook of Personality Development and The Handbook of Temperament. Shiner also served Colgate as a university professor for the Scientific Perspectives program and served as the inaugural faculty director of the Ciccone Residential Commons.

Established in 1988 by Richard Kessler ’52 to assist the University in attracting and retaining outstanding faculty in the field of economics. Selection of the individual is based on the individual’s scholarly achievements and teaching excellence. The holder may be a tenured or nontenured member of the Colgate faculty or a newly recruited member of the Colgate faculty.

Carolina Castilla has been a member of the economics faculty since 2011. She is a development and behavioral economist whose research interests also include intra-household decision-making and gender economics. Articles that she has authored have appeared in journals such as the Journal of Development Economics; American Economic Review: P&P, the Journal of Agricultural Economics, and Applied Economics, among others. On campus, she is a valued member of the department and a respected teacher of applied econometrics and applied microeconomics; she also pioneered the core course (Ir)rationality of Decisions. She is a founding member of the Liberal Arts Colleges Development Economics Conference.