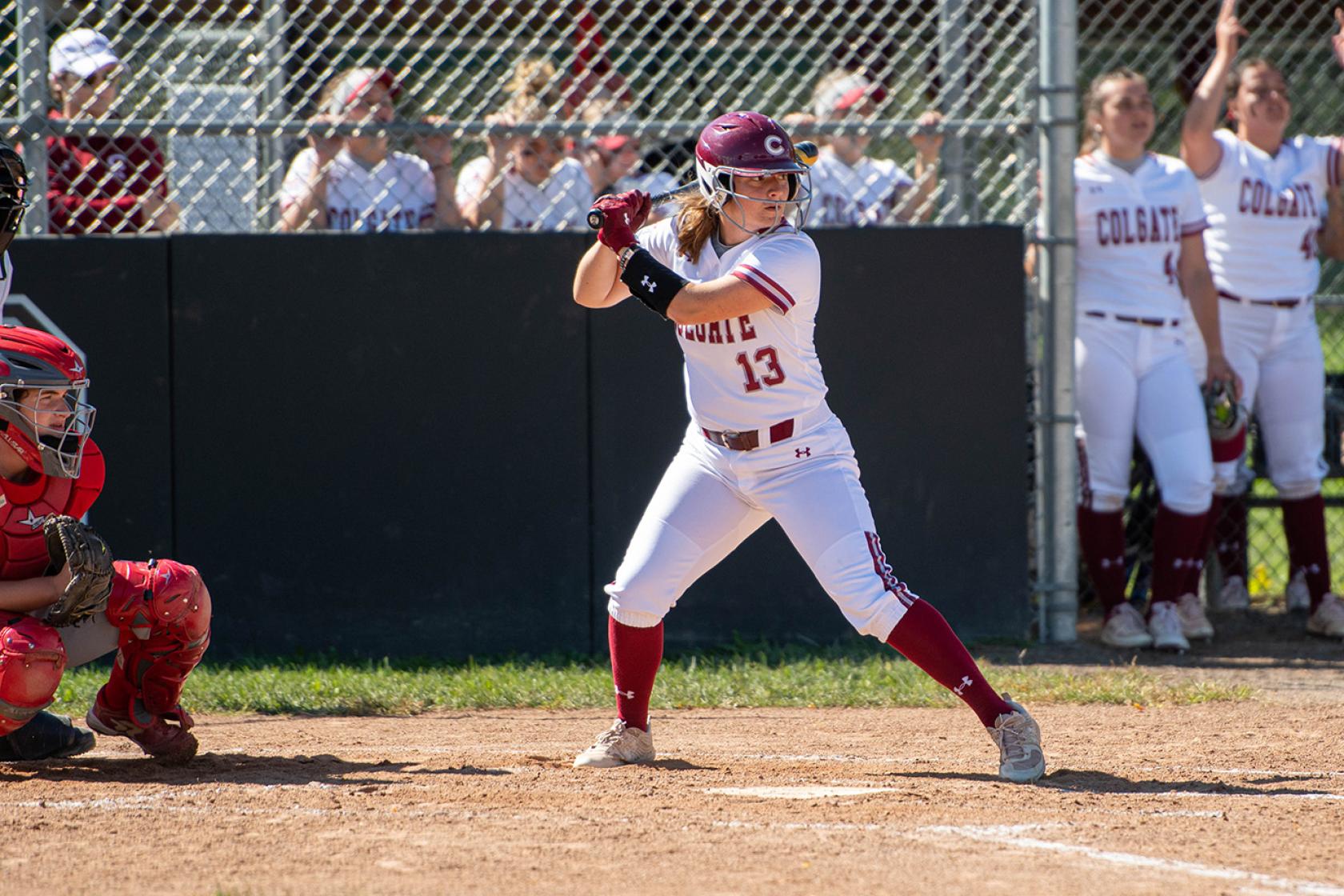 The Campaign for the Third Century touches on all aspects of the Colgate experience. A combination of academic rigor and athletic excellence has long been a hallmark of Colgate’s identity and one of the University’s most distinctive strengths. As one of the few liberal arts colleges that compete at the Division I level, Colgate offers student-athletes a rare opportunity to compete and study at the highest possible level. Read about softball standout Steph Jacoby '23, a top chemistry major with an interest in atmospheric research.

Steph Jacoby '23 has a busy summer on deck.

The chemistry major and All-Patriot League outfielder from Downington, Pa. will be immersed in on-campus atmospheric chemistry research for seven weeks in the laboratories of Wynn Hall this summer.

Then she's packing a suitcase and traveling to Houston for a week of test flights before heading to Pyeongtaek, South Korea, where she'll continue her research from a hangar on the Osan Air Force base with her advisor, Assistant Professor of Chemistry Anne Perring. The study will involve flying around the area to collect data.

Jacoby and Perring's research will be part of a project that studies the chemical and climate impact of the Asian summer monsoon, which can bring moisture and pollution from the troposphere into the stratosphere, affecting climate and the ozone layer. NASA and the National Science Foundation organized the project.

"It's a great opportunity that I could not have predicted when coming here," Jacoby said. "It's one of those moments where it shows how many doors Colgate opens."

The Colgate duo will be part of a team from the National Oceanic Atmospheric Association.

Jacoby will gain valuable experience in a field she wants to study in graduate school. It's also the next step in her pursuit of an interest that developed as a Colgate student.

Jacoby arrived in Hamilton as a softball recruit with an interest in biology and medical research. But realizing her passion for environmental science was greater, she shifted to chemistry.

"Chemistry was a good way to get a broad background to prepare me for a lot of avenues after college," said Jacoby, who wants to obtain a Ph.D in atmospheric chemistry or earth science.

Jacoby has excelled in her rigorous chemistry curriculum while also becoming a key member of the softball team. She has an overall GPA of 3.94.

Jacoby says the factors behind her success come down to good study habits and possessing a competitive spirit. She relishes a good challenge, and says chemistry also comes naturally to her.

"It has definitely taken a lot of hard work and time commitment — and making sure that outside of the class I'm taking it upon myself to look at different resources and meet with professors," she said.

"Steph has a great work ethic and grasps complicated things quickly but she's also really humble and kind with her classmates," Perring said. "She is concerned about the environment and is really thoughtful about how she can use her time now to get training that will be relevant to her future goals."

Jacoby also credits her softball coaches, who have made it easier for her to balance academics and athletics by working around her schedule. When a practice conflicts with a lab, Jacoby will train one-on-one with coaches at another time.

She has a .304 career batting average. On May 14, 2021, she clubbed a go-ahead home run against Army to give the Raiders a 4-3 win in the Patriot League tournament.

During a recent three-game series against Bucknell, Jacoby smacked a walk-off homer in the final game, giving the Raiders a series sweep.

Head Softball Coach Marissa Lamison-Myers praised Jacoby for juggling softball and schoolwork. She said the junior is one of the most clutch hitters she's ever coached.

"Steph is every coach's dream when it comes to her competitiveness and work ethic," Lamison-Myers said. "There is nothing she isn't capable of doing and nothing that intimidates her."

This story was originally published on ColgateAthletics.com.